I'm afraid this is the first I've heard of a "txt" flavoured Blosxom. Try dropping the "/+txt" bit from the end of the URL. 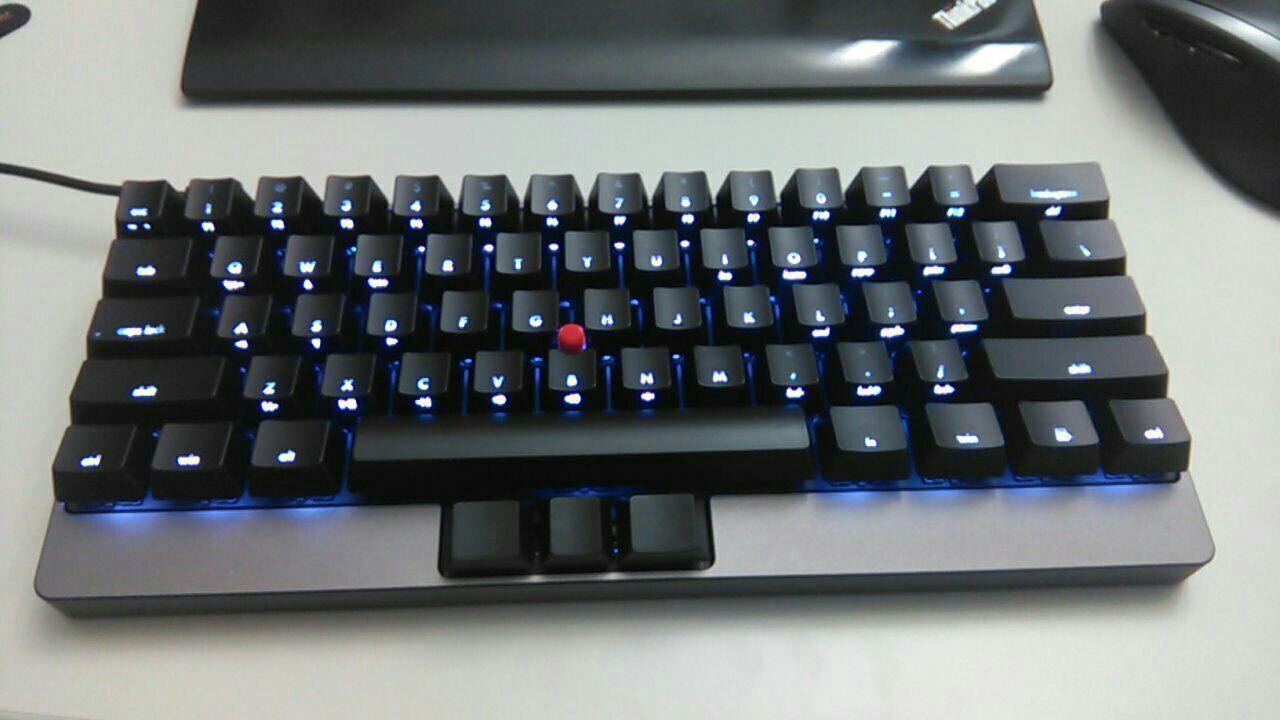 My Modifications So Far

On Sunday, the 18th of February 2018, the 4th Swiss Mechanical Keyboard Meetup will happen, this time at ETH Zurich, building CAB, room H52. I’ll be there with at least my Tex Yoda II and my vintage Cherry G80-2100.

(JFTR: It was actually USD $299 plus shipping from the US to Europe and customs fee in Switzerland. Can’t exactly find out how much of shipping and customs fee were actually for that one keyboard, because I ordered several items at once. It’s complicated…)

I always was and still are a big fan of Trackpoints as common on IBM and Lenovo Thinkapds as well as a few other laptop manufactures.

For a while I just used Thinkpads as my private everyday computer, first a Thinkpad T61, later a Thinkpad X240. At some point I also wanted a keyboard with Trackpoint on my workstation at work. So I ordered a Lenovo Thinkpad USB Keyboard with Trackpoint. Then I decided that I want a permanent workstation at home again and ordered two more such keyboards: One for the workstation at home, one for my Debian GNU/kFreeBSD running ASUS EeeBox (not affected by Meltdown or Spectre, yay! :-) which I often took with me to staff Debian booths at events. There, a compact keyboard with a built-in pointing device was perfect.

Then I met the guys from the Swiss Mechanical Keyboard Meetup at their 3rd meetup (pictures) and knew: I need a mechanical keyboard with Trackpoint.

IBM built one Model M with Trackpoint, the M13, but they’re hard to get. For example, ClickyKeyboards sells them, but doesn’t publish the price tag. :-/ Additionally, back then there were only two mouse buttons usual and I really need the third mouse button for unix-style pasting.

Then there’s the Unicomp Endura Pro, the legit successor of the IBM Model M13, but it’s only available with an IMHO very ugly color combination: light grey key caps in a black case. And they want approximately 50% of the price as shipping costs (to Europe). Additionally it didn’t have some other nice keyboard features I started to love: Narrow bezels are nice and keyboards with backlight (like the Thinkpad X240 ff. has) have their advantages, too. So … no.

Soon I found, what I was looking for: The Tex Yoda, a nice, modern and quite compact mechanical keyboard with Trackpoint. Unfortunately it is sold out since quite some years ago and more then 5000 people on Massdrop were waiting for its reintroduction.

And then the unexpected happened: The Tex Yoda II has been announced. I knew, I had to get one. From then on the main question was when and where will it be available. To my surprise it was not on Massdrop but at a rather normal dealer, at MechanicalKeyboards.com.

At that time a friend heard me talking of mechanical keyboards and of being unsure about which keyboard switches I should order. He offered to lend me his KBTalking ONI TKL (Ten Key Less) keyboard with Cherry MX Brown switches for a while. Which was great, because from theory, MX Brown switches were likely the most fitting ones for me. He also gave me two other non-functional keyboards with other Cherry MX switch colors (variants) for comparision. As a another keyboard to compare I had my programmable Cherry G80-2100 from the early ’90s with vintage Cherry MX Black switches. Another keyboard to compare with is my Happy Hacking Keyboard (HHKB) Lite 2 (PD-KB200B/U) which I got as a gift a few years ago. While the HHKB once was a status symbol amongst hackers and system administrators, the old models (like this one) only had membrane type keyboard switches. (They nevertheless still seem to get built, but only sold in Japan.)

I noticed that I was quickly able to type faster with the Cherry MX Brown switches and the TKL layout than with the classic Thinkpad layout and its rubber dome switches or with the HHKB. So two things became clear:

Unfortunately the Tex Yoda II was without that cursor block. But since it otherwise fitted perfectly into my wishlist (Trackpoint, Cherry MX Brown switches available, Backlight, narrow bezels, heavy weight), I had to buy one once available.

Because I was nevertheless keen on a TKL-sized keyboard I also ordered a Deck Francium Pro White LED Backlit PBT Mechanical Keyboard (Brown Cherry MX) which has an ugly font on the key caps, but was available for a reduced price at that time, and the controller got quite good reviews. And there was that very nice Tai-Hao 104 Key PBT Double Shot Keycap Set - Orange and Black, so the font issue was quickly solved with keycaps in my favourite colour: orange. :-)

The package arrived in early January. The aluminum case of the Tex Yoda II was even nicer than I thought. Unfortunately they’ve sent me a Deck Hassium full-size keyboard instead of the wanted TKL-sized Deck Francium. But the support of MechanicalKeyboards.com was very helpful and I assume I can get the keyboard exchanged at no cost.